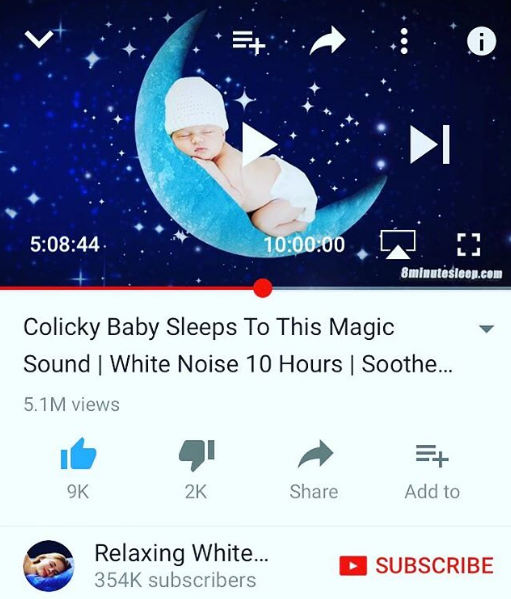 This audio-clip on YouTube has been an absolute life saver! It was at 2-3 weeks when her crying bouts first began. My little one was an angel who slept through most of the night in her first weeks. That all changed soon. It was then that I started reading up on white noise and how it helps babies calm down and soothe themselves. White noise is that static sound that emits from your TV, a working vacuum cleaner or hairdryer. It is said that these sounds are very similar to womb sounds such as your heart beating, stomach noises, blood flowing, breathing and a mothers muffled voice. Because white noise mimics the sound atmosphere of the womb, it is believed to be comforting to your new born baby who has not yet gotten used to the outside world. The constant repetitiveness of white noise also helps your little one stay asleep, especially during those times when they startle themselves awake and are unable to return to sleep, and the consistent loudness also drowns out other noises so that it won’t disturb the baby at night.

I don’t however recommend using it all the time and getting your child hooked on it. I only use it when I really have to and as a last resort. I try my best to put the baby to sleep without it. But it is such a relief during those difficult crying bouts or at the peak of a growth spurt when you’re exhausted and in tears waiting for the baby to sleep for a few hours.

PS – even though the video says ‘Colicky Baby’, i don’t know if it actually works with a baby who is colicky. My little girl isn’t and it works for her. It did for quite a few months.