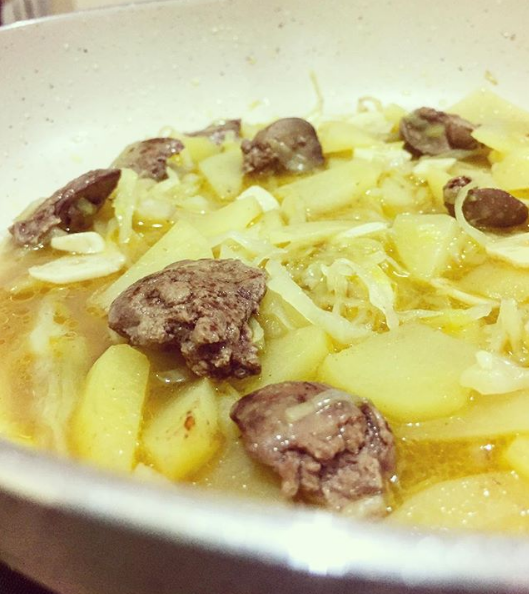 I gave my daughter Chicken Liver as her 83rd ingredient to try in a liver, cabbage, potato and garlic soup tempered in unsalted butter (I removed the heart before adding the washed and cleaned liver). It smelt amazing and tasted great too.
However, she didn’t seem to take to it instantly because the taste of chicken liver is quite strong and its texture dense and pasty.
But I’m going to try a little again with her food on Monday and I hope she starts to like it just as mush as I do.
Animal livers are a form of high-quality protein and considered the most natural and concentrated source of vitamin A. They contain vitamin D, vitamin E, vitamin K and all B vitamins (vitamin B12 in particular). Chicken liver is also full of folic acid, iron, copper, zinc, chromium and purines (nitrogen containing compounds that serve as precursors for DNA and RNA).
Consuming chicken livers protects against anemia, promotes healthy eyesight, aids growth and repair of tissue, boosts mental health, improves immunity, strengthens teeth and bones, maintains healthy skin, hair and nails, prevents loss of memory and Alzheimer’s, fights fatigue and regulates cardiovascular function due to its content of the nutrient CoQ10.

Liver is a rich source of vitamin A, a nutrient that plays an important part in the development of the human body. But it is important to understand that there are two kinds of vitamin A that we receive through our diets.
1. Provitamin A carotenoids – including beta-carotene, a pigment found in foods like sweet potatoes that the body converts to vitamin.
2. Preformed vitamin A – found in foods from animal sources, including fish, dairy and meat.
One argument for chicken liver (or any other animal liver) being bad for you is because of this secondary source of vitamin A; a nutrient that can be harmful if consumed excessively. You probably remember being advised against eating liver while you were pregnant as it may induce birth defects. It can also lead to an increased risk of bone fracture in infants. This is because vitamin A blocks the activity of vitamin D, leading to reduced bone mineral density. Vitamin A toxicity can also cause liver damage.
But for all these to happen you must consume it in extremely LARGE amounts. And this is a very unlikely scenario for most adults.
But because we are discussing feeding tiny humans with somewhat immature organs, it is perhaps safe to limit your little ones consumption of chicken livers to moderate portions, a few times a week, particularly if he is already receiving preformed vitamin A from another source (a fortified cereal or a supplement prescribed by your doctor).
As to the assumption that liver contains many toxins and is unsafe for baby, first understand this. One of the roles of the liver is to neutralize toxins (such as drugs, chemical agents and poisons); but the liver does not store these toxins (they are more likely lodged in fatty tissues and the nervous system). But it does store many important nutrients. These nutrients provide the body with some of the tools it needs to get rid of toxins. So there is no risk of consuming toxins when consuming livers.
Plus, liver is a nutrient-dense food that is extremely beneficial to your growing baby, so speak to your pediatrician and include it your baby’s diet as soon as you safely can.
(purchase organic whenever possible but I haven’t found it in Colombo yet).